Ing. Petr Faruzel
Chairman of the supervisory board

Vice-chairman of the supervisory board

Ing. Marian Szotkowski
Member of the supervisory board

The beginning of refractory materials production in Třinec reaches back to the first half of the 19th century when the Czech Chamber started to produce raw and cast iron by the river Olza. The first refractory materials were used for the blast furnace castings in aggregates working in iron foundry and enamel plants. Gradually production expanded and products for coking plant steelworks and rolling-mills were made. In 1889 from the original small workshop a refractory plant which satisfied the whole need of iron factories came to existence. Approximately 20.000 tons of shamotte and silica materials were produced in the factory. Owing to the increased steel production and change of requirements on assortment and quality of delivered refractory materials a new company was put into operation in 1961 and enabled the production of 75.000 tons of shamotte, high/alumina, siliceous and magnesite products.

In 1994 in the course of the privatisation of TŽ (Třinec ironworks), linking to the long-time tradition of Třinec ceramic and refractory production, an independent private company REFRASIL, Ltd was founded and in a relatively short period of its existence it earned a prominent position in the temporary Czech metallurgical ceramics industry.

The quality system in REFRASIL is certified in accordance with ČSN EN ISO 9001: 2015, except for the activities of the economic department. 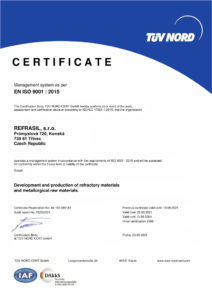